The solution model is served by NexJ Model Engine, which is deployed on a Java EE container. The container communicates with the rest of the enterprise system, including databases, web servers, mail servers, and other components. 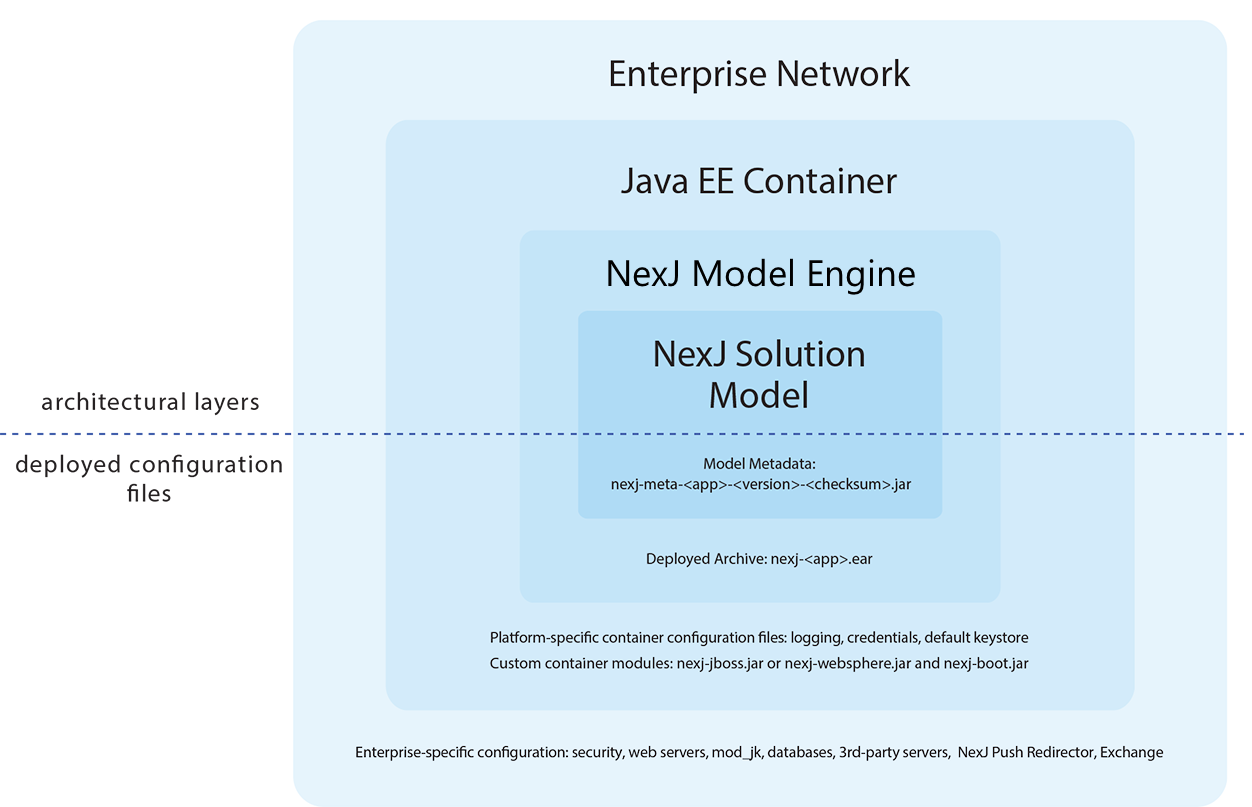 The model defines channels, which are interfaces to resources that will be provided by the model engine, Java EE container, or the entire enterprise system. It also defines data store schemas that will be managed by the model engine, container, or enterprise. The channels and data store schemas are defined without knowing the details of underlying resources the interfaces will be bound to or what underlying stores the schemas will be bound to. The model defines platform-independent application behavior that interacts with channels and data stores.

The metadata for the model is contained in a series of XML files, including the data store definitions and channel definitions used by the application. These metadata files are stored in a single JAR file, which is called nexj-meta-<app>-<version>-<checksum>.jar. Since the solution model is platform independent, the same metadata is used regardless of where and how the application is deployed.

NexJ Model Engine runs the NexJ application as the runtime interpreter of the NexJ solution model. It is platform independent and is deployed identically to any supported Java EE container. It implements any channel or data store defined in a model, either directly, or by delegating to the Java EE container.

The Java EE container binds directly to the operating system interfaces and also to enterprise resources, such as database servers. It implements HTTP request handling, including encryption, authentication, and load balancing.

The container provides standard Java class libraries and APIs upon which NexJ Model Engine relies. It also has information about the model engine APIs used by the container.

Other container configuration details include the following:

The container must include the following platform-specific libraries, which are custom implementations of container module APIs:

The Java EE container is configured by a combination of NexJ Studio tools, manual configuration, and third-party tools.

The enterprise network includes additional servers implementing the other tiers of the application, including database servers, HTTP servers, the push redirector, Microsoft Exchange Server, and other third-party servers. It provides all the network peers with which the NexJ application integrates.

These integration points are configured manually or using third-party tools. The connections between these servers and the NexJ application are defined in the channel and data source files created for the NexJ application in NexJ Studio. In addition, you may need to use NexJ Admin Console and NexJ System Admin Console to enable various third-party functionality for NexJ CRM users.

The NexJ solution is deployed on a Java EE container, such as WebSphere Application Server or NexJ Server. It requires a relational database to store both NexJ metadata and client data.

This minimal configuration might be sufficient for a sample deployment used for development. A production deployment in an enterprise environment has a large number of optional components, depending both on the existing environment and on the desired NexJ application functionality. 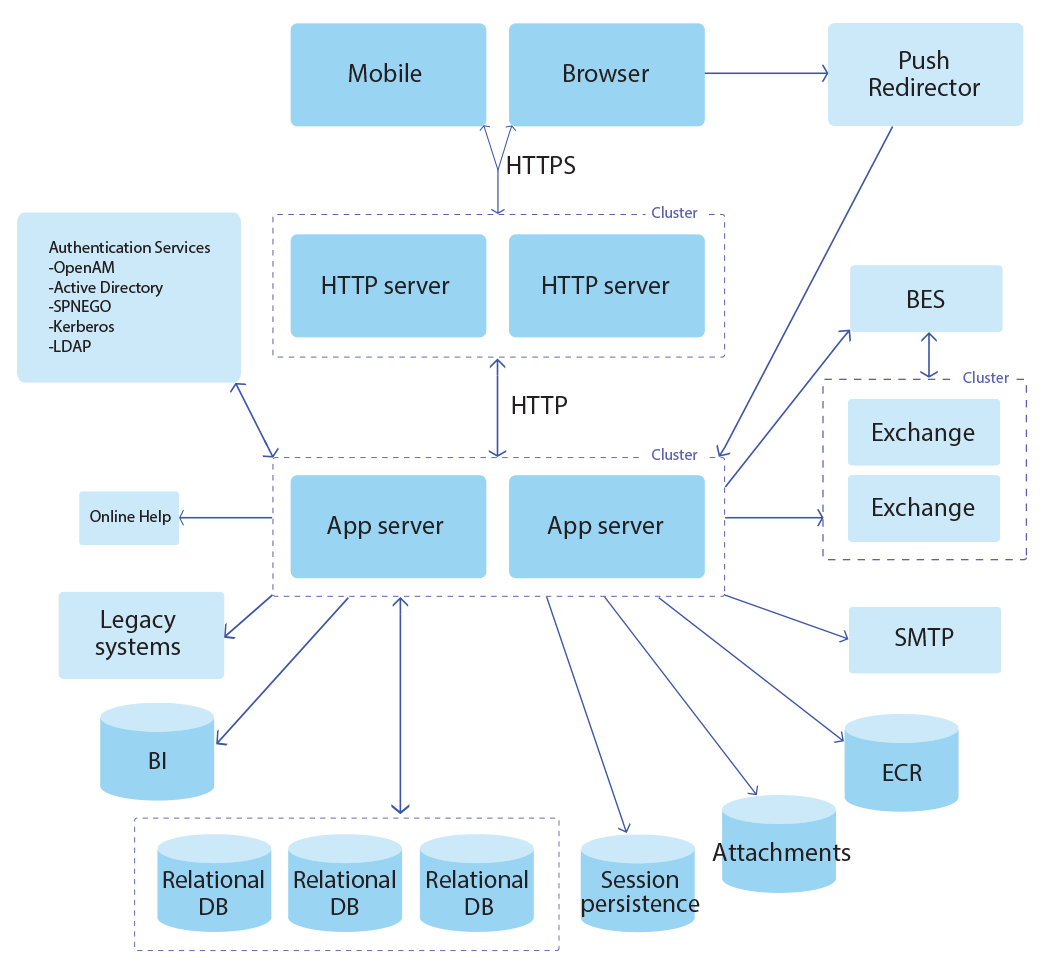 End users can access NexJ CRM using an Internet browser on their computer. In addition, mobile versions of NexJ CRM are available.

Ensure that the end users who will access the product you deployed have one of the browsers or mobile devices listed in the Release Notes document for your version of the product.

One or more HTTP servers (or web servers) are used to host the web sites that represent the NexJ solution, including NexJ CRM, NexJ Admin Console, and NexJ System Admin Console. The web servers can be configured to provide user authentication, so that information between the user interface and the application server that serves the NexJ CRM application is sent securely. They can also be used to distribute requests from the user interfaces across multiple application servers.

The IBM WebSphere Application Server is distributed with the IBM HTTP Server, so their integration is seamless.

For information on installing and configuring NexJ Server, see Setting up NexJ Server.

Online help for your NexJ solution can be deployed on the same web server as the applications or a separate web server, which may allow easier updates. For more information, see Enabling online help.

You can configure single sign-on authentication for NexJ applications so that users are able to access other enterprise applications without having to again log in until their session has expired. NexJ uses Windows Authentication and the SPNEGO negotiation mechanism to securely authenticate users and determine their level of authorization. If Windows Authentication is not an option, Java Kerberos can be used as an alternative. For more information, see Configuring user browsers for silent single sign-on.

The Enterprise Component Registry contains information about the portlets included in your NexJ solution. It also includes the User Registry, which contains information about NexJ users and user permissions. The functionality for ECR is packaged with your deployed model. The data for ECR is stored in a database, whose details are defined as a datasource connection file using NexJ Studio.

In NexJ CRM, users can add computer files, such as Microsoft Word documents, to activities, campaigns, batch emails, or documents. Use a datasource connection file in NexJ Studio to indicate whether you want the attachments saved in a separate database or file system to improve performance.