Define a NexJ model to develop new application functionality, or to customize and expand a previously published model.

Models are the largest cohesive structure that you work with when designing your applications using NexJ Studio. Each NexJ model is a full description of the application you are designing and implementing. You can build models from scratch, customize and expand an existing model, or incorporate the functionality of other published models by mixing them into the model you are developing.

Each model can specify a base model whose contents become a starting point for additional development. Elements in the base model can be modified and expanded through customization.

Models rarely exist in isolation. More often, when you develop a model, you want to base it on an existing model, and then create additional features or modify the functionality of the base.

When you first create a model, you must specify an available model as a starting point for your development. This model is called the base model, because it provides the base on which you build your new model.

The following diagram illustrates the structure of a newly created model. 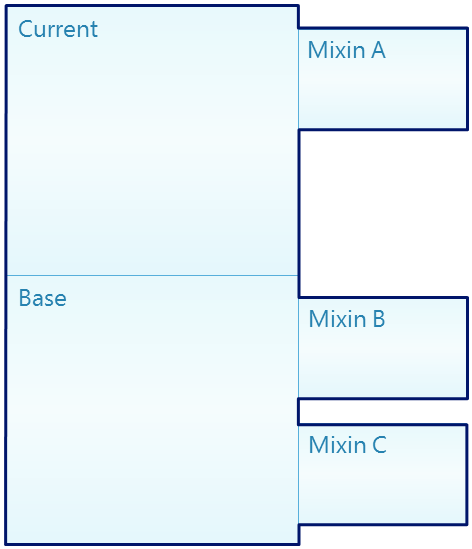 The base model contains a set of elements such as classes, screen definitions, and messages. The current model is the model that you edit directly and which will contain any customizations of the base model, overrides of the mixins,
and additional unique resources. Collectively, all of these models together are called the working model.

The following diagram illustrates the idea of customization. 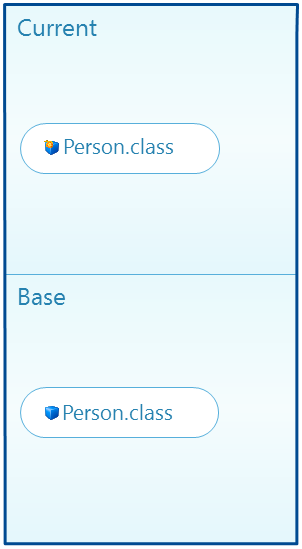 In the diagram, the Person class has been customized. A copy of the class from the base model has been added to the current model and modified. No mixins are shown in this diagram.

Because the inheritance structure is all-inclusive, you are unable to remove model elements through customization. That is, if a resource, a test plan for example, exists in the base model, it must continue to exist in any working model that uses that base.

The linear inheritance structure provided by base models is powerful, but does not enable the inclusion of optional components. For example, test scripts are essential to ongoing development of a model but are not required to deploy and run it. Similarly, content in the documentation layer may contain information pertaining to the model, but does not affect model development or deployment. If more modular development is required, it can be achieved through the use of mixin models.

Mixin models contain modules of functionality that you can optionally add to your overall working model. The elements in a mixin are additional to those in the base model, and can potentially be overridden by the current model.

Mixins support the development of independent components. Multiple mixins can be the responsibility of separate teams and then combined later into a single working model that references each mixin component.

When you include a mixin in your model, you can specify whether you want the ability to customize mixin elements or not. In the context of mixins, this customization is called overriding. When you allow your model to override a mixin,
you are able to customize the elements in the same way that you do elements of the base model.

If a resource exists in both the base model and the mixin model, then you must allow overriding of the mixin and customize one or the other versions of the resource in the current model. If you do not allow your model to override the mixin, then any duplication of elements between the mixin and the other parts of the working model results in an error.

The following diagram illustrates a working model that includes both customization of a base resource and overriding of a mixin resource. 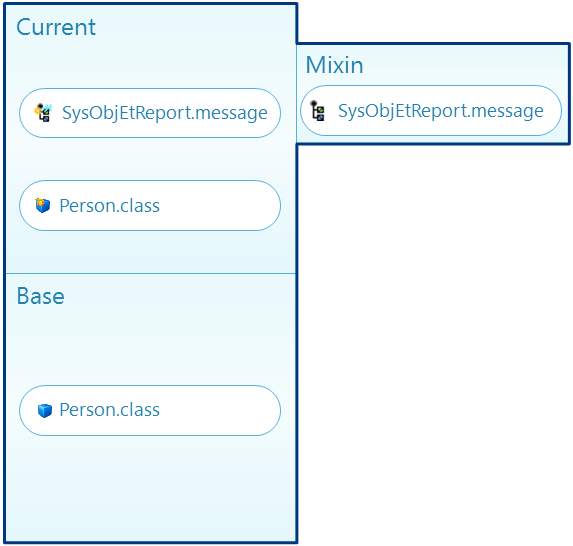 In this model, the Person class has been customized, and the SysObjEtReport message has been overridden. In both cases, the version of the resource contained in the Current model is what is used when you deploy the model.

If a mixin contains functionality that is a key component of the working model, you should consider putting that functionality into the base model instead.

Models can fail validation depending on a number of conditions affected by customization and override settings.

To pass validation, all elements in the model must be clearly identifiable. If the addition of a mixin causes ambiguity about which element a model should use, then the model will not validate.

Specifically, validation fails in any of the following situations:

A model can override resources from a mixin if it is also the model's base. The following example demonstrates this dependency. 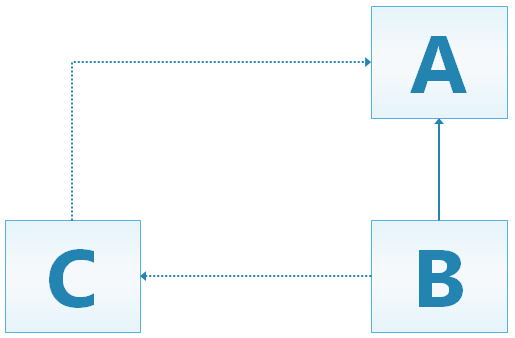 This type of dependency is only possible if A is the immediate base model of B. Any number of additional mixin levels do not affect the inheritance rule. The following example will not return a MetadataValidationException error. 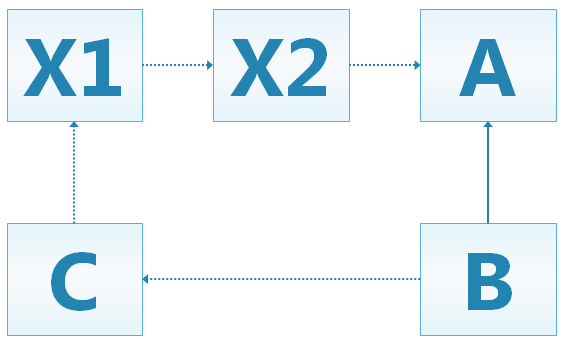 NexJ Framework does not support scenarios with multi-level inheritance hierarchies.

The following example will return a MetadataValidationException error. B cannot override resources from A as A is not the immediate base model of B. 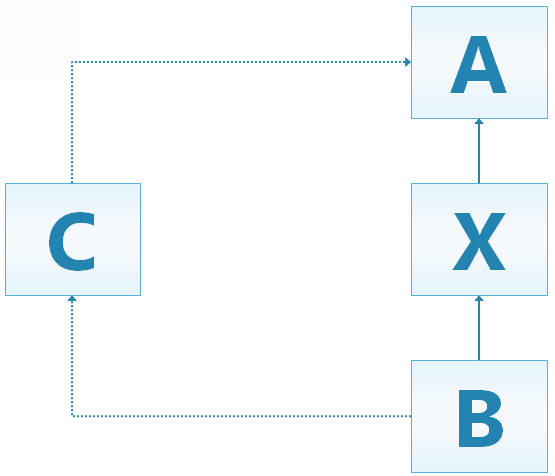 Models are defined by a .metadata file. This file contains the model's version number, revision number, and namespace. Additionally it contains the information required to identify the base and mixins that the model references.

Use the Model Library to create a working model for you to begin developing.

To create a model:

Your new model is now created. If you chose the Create environment files option, the following three environments will be available for you to use:

Removing base models from working models

Remove a base model from your working model if you do not require any functionality from the base model. This is often done for mixin models, which may be functionally incomplete by themselves, but useful when combined with a larger and more comprehensive model.

Normally, you only remove the base model of a new model. Removing the base model from a model that has already undergone substantial development is strongly discouraged.

To remove the base model from a working model:

Your model no longer references a base model. Resources from the base model disappear from the Model view.

Review the contents of the Navigator view to ensure that the list of model elements that are part of your model are as expected, and delete any items that may have been placed in the dumps and upgrades directories.

Module prefixes are a method of avoiding element name conflicts when using mixins.

Consider using module prefixes when you create a mixin model and anticipate that your resource names will overlap with the resources of models that incorporate your mixin. When you specify a model prefix, that prefix is added to all resources in the model, becomes part of their name, and must be used whenever reference is made to them, even from within the prefixed model.

Specify the module prefix in the model's Properties dialog.

To add a module prefix:

Check the Model view to ensure that the module prefix has been added to the model's resources.

A resource from a mixin appears with an M on the resource icon, for example, the icon for a class looks like this:

. Mixins that use a module prefix have their prefix added to their resources. For example, a mixin with the prefix nu has
its resources appear as nu:<name>.

Adding a module prefix effectively places the mixin in its own namespace. As a result, when you incorporate a mixin with a module prefix into your working model, you are unable to override any of the resources it provides you.

If you use a model with a module prefix as your base model instead of a mixin, then the working model must use the
same prefix in order to successfully validate.

Expand the functionality of your working model by adding existing mixins.

Ensure that the published mixin JAR files are in a location that you can access while running NexJ Studio. These files also need to be available later when you deploy the model.

To add mixins to your model:

You can now continue development of your working model, incorporating the functionality of the mixin that you have added.

Overriding resources allows you to customize resources of a mixin in the working model.

To override the resources of a mixin:

The resources of the mixin are now available for customization.

Customizing a mixin's resources is possible only when the working model has enabled overriding resources for the mixin.

To customize a resource of a mixin:

The resource is now customized and available for changes. Customized resources appear in color with a starburst overlay on the resource icon. For example, a customized class looks like this:

If you are working with a project that has mixins and you want to make changes to the mixed in model, you need to ensure your working model incorporates all the mixin updates.

The mixin model exists as a separate project that you can edit and save changes for. While developing this model, you may want to test the changes you have made by mixing your edited model into the parent project.

This is a simple process that can be used to test locally and also be deployed to remote testing environments. First, open the model you are using as the mixin in NexJ Studio. Then, use one of the following two ways to include your version of the model as a mixin for the parent project: a fuzzy/folder mixin or a published JAR mixin.

When dealing with a project that has multiple mixins, ensure that the mixins are internally consistent across all projects. Consider the following scenario:

Mixing in models by pointing to the mixin folder

To include a mixin model in your working model from a folder:

Any changes you make in the mixin model will be reflected in the parent project any time you restart your server or hot swap changes.

Mixing in models from a published JAR file

You cannot use the fuzzy/folder mixin method to deploy your model. Instead, you must publish your mixin model and mix the published JAR file into the parent model.

Before you can update your working model with the changes from your mixin model, you must publish the mixin model to a JAR file. Note the location of the published JAR file.

If you must use your environment file to mix a published JAR file into your working model, use the alternative procedure that is described in Mixing in models using an environment file.

To mix a published JAR file into your working model:

The updated mixin model has been included in your working model.

You can now deploy your updated working model.

You may need to use an environment file to mix a published JAR file into your working model. This allows you to not incorporate the mixin until deployment time.

Before you can update your working model with the changes from your mixin model, you must publish the mixin model to a JAR file. Note the location of the published JAR file.

To mix a published JAR file into your working model:

The mixin model has been included in your working model.

You can now deploy your updated working model.

Publish your model to create a JAR file that contains the contents of your model.

Models must validate with 0 errors in order to publish successfully.

Validation occurs automatically when you begin to publish. After publishing is complete, the published model can be used as a base or a mixin for other models.

To publish a model:

NexJ Studio saves the model as a JAR file in the selected directory. This file can now be used as a base model or a mixin for other models.

When you publish a model that uses mixins, the new JAR file only includes pointers to the mixin code. It does not include a copy of the code itself. When you deploy the modified model, you must have the mixin files available at the same time.