When you upgrade a model, carry out the following set of tasks:

Some of the changes introduced by an upgrade, such as the addition of new classes, can be relatively straight-forward. Others, such as the modification of complex UI forms or data mappings, may require more care.

Different terms are used to refer to models based on the role they play in their relationship to other models.

Working model
Working model refers to the overall model that you are developing. The term refers collectively to the current model, base model, and any mixin models that participate in defining the application that you will ultimately deploy.

Mixin model
Mixins are models that provide additional functionality, but are typically not complete enough to be deployed on their own. When the working model is published, the elements of the mixin model are not included in the published JAR file. Only a reference to its mixin model is included. As a result, the mixin models must be available at the time of deployment.

Before upgrading, consider planning your upgrade process. For example, consider how you will review and merge upgrade changes and test upgrades.

You upgrade your model to include new features and improvements to existing features into the model. However, you may have previously customized features for your specific business needs. Your customizations may conflict with the
latest NexJ CRM functionality.

A functional feature contains multiple files and file types, for example, metaclasses, UI forms and screens, integration messages, data transformations, and services. Developers may encounter issues when working in parallel because changes are visible by file type rather than feature in the Upgrade view in NexJ Studio. To avoid this issue, consider:

When upgrading merged features and enabling new features, perform a merge of features that were too large for the merging during the initial code merge. At this stage, also run and update unit tests, then triage and fix resulting bugs. Anticipate that this stage will be the longest phase of the upgrade process. This stage may resemble a regular development phase.

Begin the model upgrade process by specifying the model that you want to use to replace your existing base or mixin model.

The upgrade model must be available as a published JAR file and loaded into the base models tab of the model library.

To specify an upgrade model.

The model now recognizes that it is being upgraded.

If the upgrade view does not open automatically, open it from the menu bar by clicking Window → Show View →Upgrade. You can then continue by reviewing the comparison summary and making any model changes required.

After you have specified an upgrade model, you can use the Upgrade view to review the model changes introduced by the upgrade and to merge changes into the current model.

The comparison editor allows you to view the detailed differences between your current and base models. During an upgrade, it allows a three-way comparison between the base, current, and upgrade models.

The comparison editor opens whenever you double-click a model element in the Upgrade view.

You cannot make changes to the Base model.

The following picture shows a current model that has customized a class by doing the following:

Notice that the overlay icons differ depending on the nature of the change. 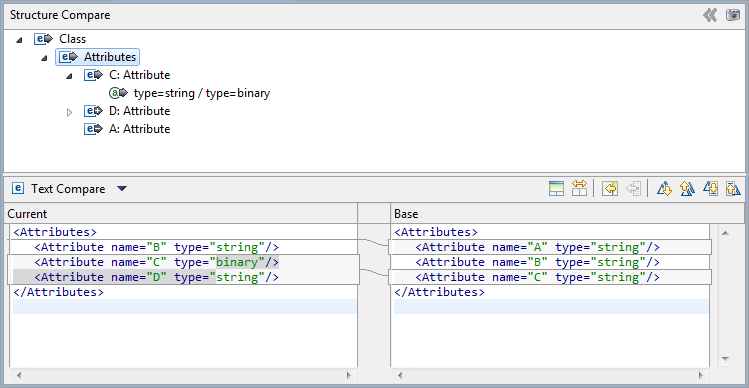 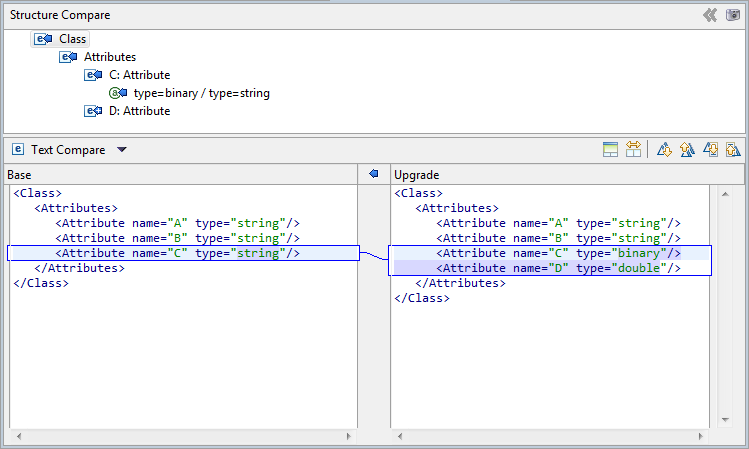 Three-way comparison occurs when a Main.upgrade file introduces changes to a customized resource. 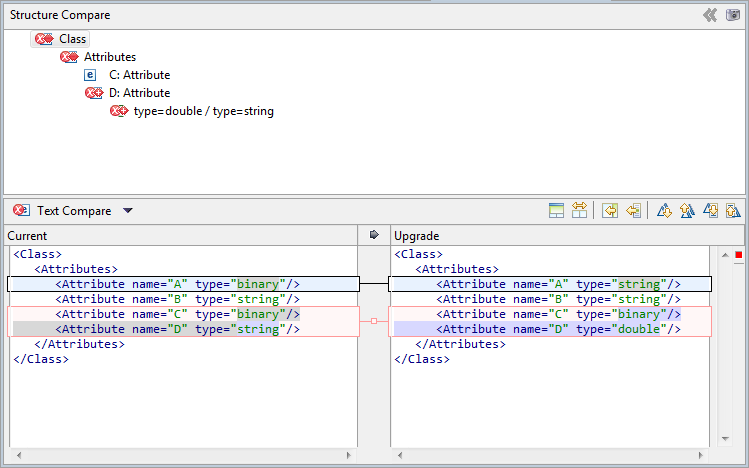 Similar to the comparison between the current and base models, you can edit the Current model directly in this editor. You cannot edit the Upgrade or Base models.

, the base model source code appears, as shown in the following image: 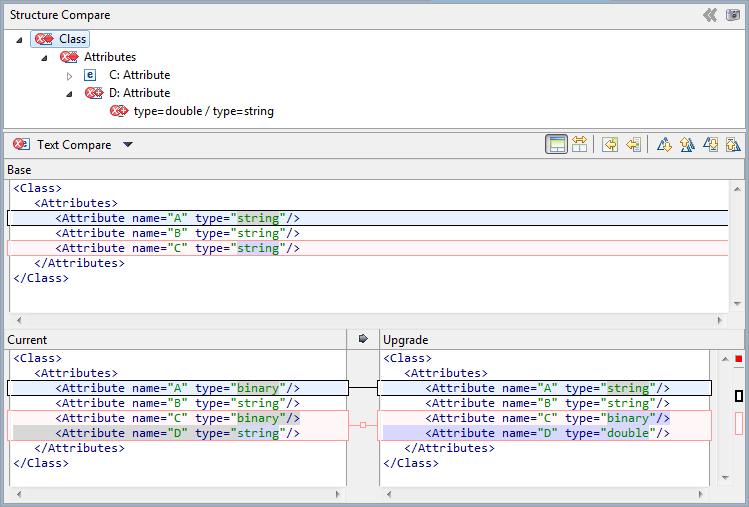 Sometimes, you may want to ignore the original base, and focus only on differences between the upgrade model and the current model. If this is the case, you can click the Two-Way Compare (Ignore Ancestor) button

. This button turns the comparison editor into a two-way comparison between the Current and Upgrade models. For example, the following image shows the same upgrade, ignoring the ancestor. 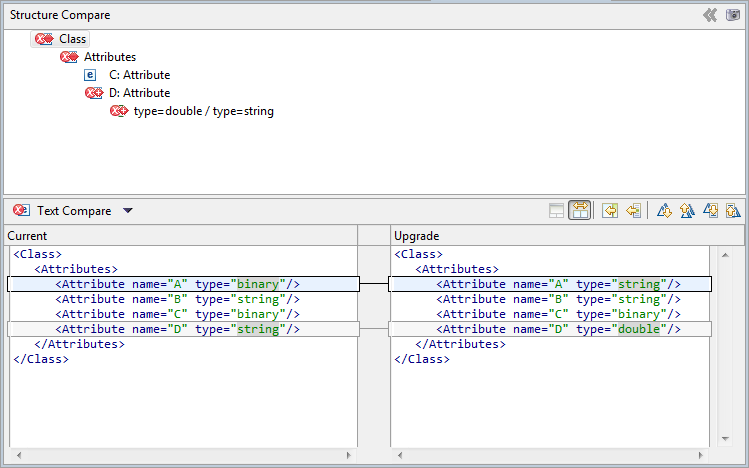 Example of a three-way difference without a conflict

Suppose your working model is based on a model called BaseModel, which has a revision value of 1.0. The models have the following details:

Now suppose that you want to upgrade your base model to use BaseModel 2.0, and that BaseModel 2.0 includes the following model change:

When you carry out the upgrade, you will not see any conflicts. This is because the changes that the current model makes to AttributeA through customization do not overlap with the changes introduced by the upgrade. In order to pick up the changes from the upgrade, however, you still have to merge those changes into your customized model.

Example of a three-way difference with a conflict

Now suppose a small change in the example. You still begin with a model based on BaseModel 1.0:

You now upgrade your base model to use BaseModel 2.0, which includes the following model changes:

Use the Upgrade view to review the changes introduced by the upgrade model.

To review the changes introduced by a model upgrade, you must have specified an upgrade model, and have opened the Upgrade view. If the Upgrade view is not open, you can open it from the menu bar by clicking Window → Show View → Upgrade.

You can use the Upgrade view at any time to view a summary of how the current model has modified and customize the base model. However, when an upgrade model is also specified, the view provides a three-way comparison between the current, base, and upgrade models.

Review and merge each change introduced by the upgrade model.

When you open a resource in the Comparison editor, the editor highlights each change. Conflicting and nonconflicting changes are identified by different highlight colours. You can review each change and decide whether to copy the change into the current model.

Continue by reviewing and merging each remaining element. When you are done, you can complete the upgrade.

Override an upgrade change before completing the merge in order to stop your current model from making use of the model element changes coming from the upgrade.

Sometimes an upgrade model introduces change that you do not want to incorporate. If the incoming changes affect an element that you have customized, then you can review and reject the change when you merge the upgrade changes. However, if the changes affect an uncustomized element, then you must customize the element in order to reject the upgrade changes.

The incoming changes to this element are now ignored unless you explicitly merge them as part of the upgrade.

If you only want to override some, but not all, of the incoming changes to an element, you can continue by merging the changes into the customized element, following the instructions in Merging upgrade changes.

You are unable to publish a model while it is in the process of being upgraded. However, you can still deploy the working model directly from NexJ Studio.

If you deploy a model during the upgrade process, the deployment makes use of the upgrade model, and not the base model. This allows you to fully test your upgrades on a test server before completing the upgrade and publishing a deployable JAR for staging and validation.

To validate and test your model:

After your model is deployed, run your unit tests and other software test plans against the application on the test server. When you are satisfied that your upgraded model works as expected, you can complete the upgrade and publish the upgraded model for deployment or further validation.

Complete the upgrade to fully replace the original base or upgrade model with the newer version.

To complete the upgrading of a base or mixin model:

It is recommended that you validate and publish your model from the Model Library dialog after completing the upgrade.

The Model XML Upgrade Tool automates the process of updating metadata files when new features have been added to the NexJ Application Framework.

Each version of NexJ Studio is associated with a core version of the framework which reads XML data files according to a structure defined in the XML Schema Definition. The Model XML Upgrade Tool revises the model's metadata files after a core framework update has modified the schema definition.

Models are defined by a .metadata file that contains the core framework version number. It is common for the core version of a model to be specified with a plus sign afterwards. This indicates the model is compatible with the specified core version and above. In the following example, the .metadata file is meant to work with version 3.0 and higher:

When the core framework version has been upgraded, the .metadata file will notice it is using an older version. Running the Model XML Upgrade Tool will perform the provided upgrade steps to ensure that the model's metadata
files are compatible with the new XML Schema Definition and update the version number in the .metadata file:

In this example, version 4.0 of the framework changes the schema definition. The Model XML Upgrade Tool will identify which metadata files are incompatible and fix them. Framework version 4.0 will change both attribute names and attribute values: required="true" will now only be recognized as constraint="required".

Under framework version 3.0 the Person class contains the following:

After upgrading to framework version 4.0, the Model XML Upgrade Tool will modify Person.meta to comply with the current XML Schema Definition. After the tool is run it will contain the following:
Person.meta (Version 4.0)

The Person class now adheres to the XML format for core framework version 4.0 and is compatible with NexJ Studio installations using version 4.0.

Use the Model XML Upgrade Tool to update your model's metadata files to comply with the XML Schema Definition of the current NexJ Application Framework.

Consider working with a clean checkout from your version control system before performing the upgrade. This allows you to review all changes before committing them or alternatively rejecting them to start over.

Your XML metadata files are now compatible with the selected target version of NexJ Studio and NexJ Application Framework.